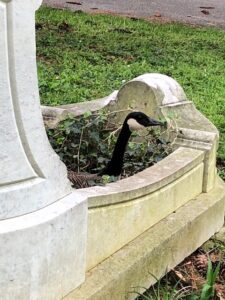 At this very moment, I am watching my water sprinkler soaking parts of my driveway, sidewalk and the front street, along with my parched lawn.  However, I consider this wasteful practice a major STEP UP in my ability to navigate the vicissitudes of life!

I have always fretted about WASTE.  I don’t like to waste water, food, money, air, gas, or anything potentially “salvageable” for practical or impractical purposes.  Yes, I’m a “hoarder”!   But a very INTENTIONAL one.  You wouldn’t believe how many salvaged fragments of life previously lived I have repurposed to make current life and living “livable”.   Back to that in a moment.

On the water front, there is certainly no redeeming value in soaking cement in the middle of a drought.   Just NONE!   So, for much of my life, I have fretted about ONLY getting water to where it’s REALLY needed … like on the grass and foliage and garden.   And it has tied me in knots trying to figure out how to water small patches of oddly-configured ground between brick, concrete, blacktop and stone WITHOUT wasting any.   What usually happens is that I end up standing for unnumberable hours mindlessly aiming a garden hose toward the most needed spots … which seriously hampers my ability to do other, more useful, things … like writing blogs or doing crossword puzzles!

But there’s actually a side benefit to all the “wastage” here: The wetness of the concrete documents the level of “soaking” the ground has received!

So, just today, after many years of mercilessly castigating OTHERS for such wasteful habits, I made an executive decision to quit fretting – and castigating others – and just go ahead and do “blanket” watering, and let the “collateral damage” pile up … considering it a sort of “indirect cost” of the business of living less encumbered by absolute and immutable principles.  [After all, God waters EVERYTHING when it rains – duh, and I’m only substituting for the momentary absence of rain!]

It’s been amazingly liberating!   I’m not “boxed in” any more by my adherence to contrived absolutes in the face of more practical matters.

[I do try to compensate for the indulgence by imposing longer intervals between “waterings”.]

Now to the hoarding.  This conservational / “fear of deprivation” inclination can be severely compromising in the extreme case … as graphically depicted in the AETV television series, “Hoarders”: https://www.aetv.com/shows/hoarders  [NOTE: I grew up in post-WWII America, when things were scarce. I still have a small collection of “War Stamps” my family had to use to get food rations.]

What’s important is the relative VALUE we attach to our holdings.   When our domicile downsized by half in 2018, it was a truly traumatic event for me, personally.   I had acquired many things that would be useful to SOMEBODY for SOMETHING … SOME DAY.  So I had to decide – and accept the decision – to let somebody ELSE look after it.  VALIDATION of behavior is important!   So we had a huge Garage Sale and I took lots of stuff to the Habit for Humanity Restore, Good Will, etc.  And we sent a lot of “residual non-validated” stuff to the dump.  I figured I could still go buy back anything I really needed from Good Will or the Restore … if, indeed, I really needed it.  Meanwhile, they could look after it, sell it or throw it out, according to their own assessment.  And if I didn’t need what I left with them, but needed something ELSE, it would be a fair trade!

So how ELSE am I “Boxing myself in”?

The one thing I couldn’t bear to throw out in the 2018 downsizing was my “intellectual property” … the decades-worth of gleanings from published sources of all kinds.   This activity was highly selective at the outset, to be sure.  Which made its relative VALUE all the more compelling.

However, along the way, it occurred to me thus:  If something was THAT valuable, and if somebody ELSE had already declared it so, it would undoubtedly appear again – likely in BOOK form or in Wikipedia.  And if it wasn’t so valuable or valued by others, it would disappear unheralded.  Again, LIBERATING!

So I’ve become much more circumspect and discriminating about things I consider to be of enduring value.  I’ve still got some distance to go, but I’m about to unburden the “Bonus Room” and my office from at least half-a-truck-load of paper holdings, however intrinsically valuable, that I will likely never have the time or inclination to deal with again.  Manually sorting and sifting is such an unproductive exercise when one can simply Google it!

In the words of Fagin from “Oliver”, “I’m reviewing the situation … “