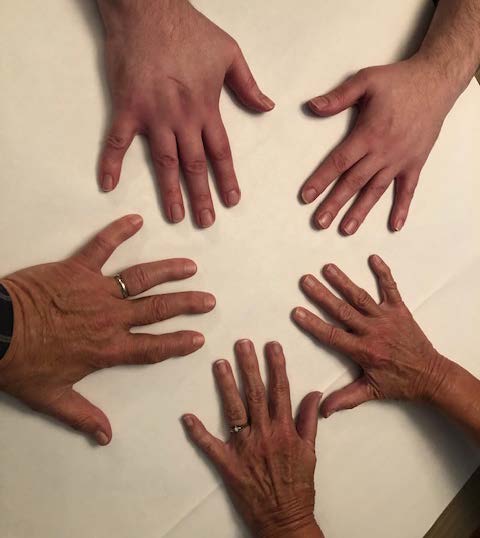 Consequently, it’s increasingly clear that getting through life “on our own two feet with our own two hands” won’t get the job entirely done.

We need a lot of help!

And we don’t want to be caught SHORT-HANDED!

The fact is that, in addition to our own two hands and feet, everybody needs:

There is no substitute, no matter how smart you are or how much you WANT something.

“ … what I like to call ‘Levine’s six unlinked genes for success’ are: intelligence, creativity, fire in the belly, social adroitness, curiosity, and the ethic of hard work … [However, in addition,] you may be brilliant, creative, curious, passionate, and hardworking, but if you can’t collaborate, you won’t get far.  Still, even when [people on their way up] have these raw ingredients for success, they usually need some help … for getting a handle on the quotidian challenges [they] are likely to face.”

Clearly, firm and fervent TWO-HANDEDNESS maximizes the potential impact and outcome.  Those who have the capacity to help are most enthusiastic about helping those who are MOST HELPABLE!

The need for extrinsic, three-handed, “Slingshot Accelerator” support – and the impact it can have – is most obvious at the top of the ladder.  Consider this ancient example from the Roman Empire:

It’s one of the most incredible stories in all of history.

A young boy, out of nowhere, is chosen to be the emperor of most of the known world.

Emperor Hadrian, without an heir, chose Marcus Aurelius to succeed him. But he knew that no one was born ready for the job, so he arranged for Marcus’s education. He would adopt Antoninus Pius, then 51 years old, who would in turn adopt Marcus Aurelius. One would hold the other’s place, while he trained and tutored him. The greatest philosophers in Rome were assigned to teach him too: Junius Rusticus, Cornelius Fronto, Claudius Severus and Herodes Atticus, all threw themselves into the almost inhuman task of preparing someone for absolute power.  Daily Stoic, February 16, 2021

*NOTE 1: People in the most dire circumstances will, undoubtedly, need something in addition – a HAND-OUT – but most so if they haven’t had the good fortune of having access to the primary THREE-HANDED elements.   Actually, very few escape the HAND-OUT provision, considering DEBTs OWED.

*NOTE 2: Giving one’s self a HAND-OUT by accruing personal debt is offered as a cautionary advisement, something recommended only in cases of building equity, as in education or buying a home or acquiring reliable transportation.

*NOTE 3: Inevitably, one will also need a COMFORTING / CONSOLING / CALMING / STABILIZING HAND … particularly when running “too close to the edge” and occasionally “losing a grip”.

The BOTTOM LINE is this: Make yourself HELPABLE!  Don’t venture out into the universe without ALL HANDS ON DECK!   Quartermaster

Quote of the Week “Unspared effort will not go unrewarded.” Quartermaster