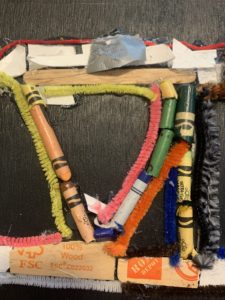 I’ve been amazed and dumbfounded by the number of disparate sources that capsulize the essential elements for successful living in packets of SIX.  This all started with my personal attempt to capsulize the elements essential for success in the workplace.  It turned out to be SIX!   (NOTE: Stephen Covey makes a case for “Seven Habits of Highly Effective People”, but we’ll give him one!)  In any case here are the samples I’ve found thus far applicable to life, in general … in no particular order:

First, we’re going to highlight the “Six Pillars of Character” outlined by Doonesbury 7/27/2020:

Some 2000 years ago, Marcus Aurelius jotted down SIX GUIDING ELEMENTS for himself, values he said that should not be “traded” for any others. What were they?

Or, how about the SIX ADMONITIONS from Arnold Schwarzenegger for 2020 graduates:

And, after all of that, Give something back.

The following six are contributed by Mitch Barnhart, Athletic Director, University of Kentucky:

“Everything you DESERVE is going to take

In order for you to thrive, you have to become USEFUL to civilization in some way.

The more useful you become, the more likely it is that you will thrive, i.e., the higher your “Thrive-Ability Index” will rise.

“Thriving” is not going to happen without a lot of OUTSIDE HELP – and not the kind of help provided by drug dealers, pimps, gangs or mafia henchmen.

In concert with the Third Principle, it is incumbent upon all of us to make ourselves HELPABLE!

One does this best by:

… all of which goes back to the THIRD PRINCIPLE:  The engagement of PRINCIPLE FOUR creates a BANDWAGON EFFECT for SIGNIFICANT OTHERS to help MOST whoever is MOST HELPABLE!

“Life doesn’t have to be as hard as we make it on ourselves!”

“Do what you’re supposed to do,

and life will turn out to be the way it’s supposed to be.”

Inscription on an old farmhouse calendar

The “CATCH” is “what you’re SUPPOSED TO DO”.   All else derives from this simple construct, which turns out to be not-so-simple!

Are we supposed to figure out “what we’re supposed to do” for ourselves, or is somebody ELSE going to line this out for us?

The “unqualified YES” is that – ultimately – we’re supposed to figure things out for ourselves.  However, this only comes with time, with maturation, and with the emergence of effectively applied “Executive Function” governing our behavior.

In the meantime, it’s going to be necessary for SOMEONE ELSE to be an instructive “guiding light” and serve that interim “Executive Function” for us.  This will include parents, teachers, community leaders, coaches, law enforcement, business owners, business partners, government, extended family, mentors, and significant others.   In the military, it would be your Drill Sergeant/Captain/Colonel/etc.  Peers?  Not so much, particularly early in the going!

It’s all about how we spend our UNSCHEDULED TIME.

The First Premise of the SIXTH PRINCIPLE is that there is no such thing as “FREE TIME”.

The Second Premise of the SIXTH PRINCIPLE is this:  Wherever you spend the most UNSCHEDULED TIME and ENERGY is where you will realize the most success.  In fact, you may become an EXPERT:

[However, note that these particular selections violate the SECOND PRINCIPLE requiring that we be USEFUL!]

Unless or until we become proficient in productively governing our own behavior, we need to take our cues from someone in higher authority.  Your mother asks you/tells you to clean up your room, CLEAN UP YOUR ROOM!   And INTERNALIZE it … don’t require being asked the next time.  Teachers give you homework, DO THE HOMEWORK!   INTERNALIZE it!  Mother tells you to “eat your vegetables!” … EAT YOUR VEGETABLES!   INTERNALIZE it.  Piano teacher gives you assignments, PRACTICE THE ASSIGNMENTS!   INTERNALIZE it.  Become a NINJA WARRIOR or JEDI KNIGHT about maximizing your unscheduled time.  Read, study history, do extra math, write … write … write … do journaling, doodle/draw, EXERCISE, learn a musical instrument, learn a second language, show up on somebody else’s doorstep and tell them you’re not leaving until they suggest something useful you could be doing.  VOLUNTEER!   Become an OWNER-DRIVER of your own life by engaging significant others.   [See also “Difference Maker”]

How do you know when your “Executive Function” is ready for prime time and independent governing authority?  When you voluntarily go looking for work, when you do your best work while UNSUPERVISED, when you begin exceeding expectations simply because you have to satisfy your own impeccable standards … AND … when you begin voluntarily DELAYING GRATIFICATION for GREATER GAINS.  You will KNOW … as will everyone else around you!

Now, go ahead and personalize your own SIX ELEMENTS, internalize them, put them in motion, and see what magic they will produce! 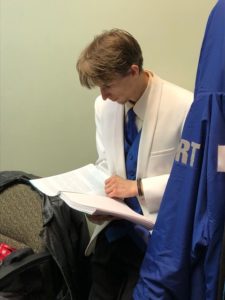 Studying for an Architecture final exam

between sets on the Kentuckians Chorus Christmas Show

You want to “Beat the System”?  Do EXTRA homework!  Do your homework AND get a job!   OK, if you’re so good, DON’T do your homework but build a thriving entrepreneurial enterprise from scratch – no safety nets (viz., Steve Jobs /\ Bill Gates)!