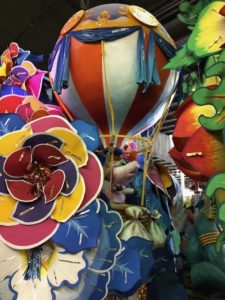 We live every day with illusions.  Some of these illusions are necessary – just to make enough sense in our own corner of the world to be able to function with minimal angst … until, at some point, the illusions no longer work.   Then we either face the truth and consequences and “new realities” or create even more preposterous illusions to assuage the discomfort in our comfort zone – or attempt to explain away our discomfort or blame it on someone or something else!

Some illusions are imposed on us by others … like Santa Claus, the Tooth Fairy, and the Easter Bunny.  … and like we’re special (so we have a measurable level of self-esteem.) … like we don’t have to “sweat the small stuff” … like “takin’ care o’ business” is “struttin’ your stuff” on a street corner … and like being cynical, misanthropic, using foul language, being demeaning/recalcitrant/defiant and subversive not only elevates us in some twisted fashion but is “cool” …

Magicians create illusions to startle and amaze us … because the more preposterous things are, the more inclined we are to believe them!

But we don’t need much outside help to get ourselves virtually wired with illusions.  We create for ourselves the illusion that our time is infinite … that we are immortal … that we’re OK just the most depraved way we are (whatever that is) … that if we “don’t feel like it”, we shouldn’t be bothered doing it … that tomorrow will take care of all the indiscretions of today …

Perhaps the most unwitting illusion is “taking things for granted” … the failure to recognize or acknowledge the numbers and amounts of subsidies that contribute to our success and well being.

A small child was seen gleefully skipping all the black floor tiles in the hospital corridor while hanging onto the hands of two adults.  “I did it all by myself,” she exclaimed as she cleared the last tile.  Well, not exactly!

“The free market has worked its magic”, claimed the Barnett Shale Energy Education Council in 2012, referring to a natural gas boom created by a drilling company innovation.  However, this “free market success” was built on more than $100 million in government-funded research over a period of 20 years to develop the shale fracking process – in the face of scathing corporate criticism – and billions more in tax breaks.  The federal energy subsidies for  “… gas and petroleum industries altogether accounted for about $2.8 billion in federal energy subsidies in fiscal 2010.”  [Kevin Begos, Associated Press]

Overcoming our illusions is a life-long struggle.

Some illusions are more difficult to shake than others.  Samplings include:

But illusions are not necessarily all bad.  Scientists would be hamstrung without them … in which case, their “illusions” are called “hypotheses”.  The only difference between scientists thinking as scientists and the rest of us is that scientists insist on TESTING their illusions, and then adjust their thinking to accommodate “new realities” according to the outcomes experienced.

CAUTIONARY NOTE: Illusions can easily turn into DELUSIONS without warning!   (Rogue scientists have been caught fabricating data to conform to their favorite hypotheses!)

NOTE 2:  The most seductive illusions are “Conspiracy Theories” … carrying the aura of divination and inside-tracking of alternative “Truer Truths”.  It is, indeed, intoxicating to “discover” that the Mayan civilization originated on Mars!

Those brave enough and/or interested enough in exploring more of life’s “New Realities” will find the following reference a great resource:

http://www.waltermartin.com/forums/showthread.php?261-An-Eschatological-Laundry-List   “An Eschatological Laundry List:  A Partial Register of the 927 (or was it 928?) Eternal Truths”.   This list appears in “If you meet the Buddha on the Road, Kill Him!” by Sheldon B. Kopp.  Published by Bantam Books, ISBN 0-553-27832-0.

1) This is it!
2) There are no hidden meanings.
3) You can’t get there from here, and besides there’s no place else to go.
4) Nothing lasts.
5) There is no way of getting all you want.
6) You can’t have anything unless you let go of it.

REALITY can be a tough traveling companion … and “New Realities” can be even tougher, especially if one’s expectations are embedded in VIRTUAL reality – or simply in “the way things have always been”.  [NOTE: Neverland is called “Neverland” for a reason!]  But life is always evolving and nudging us to “grow into our full potential”, with the “tough stuff” meant to “toughen us up”.  We need to do REALITY CHECKS and HACK into every possibility life offers.   You will be amazed at what you can do and become by consistently OVERCOMING!  Quartermaster