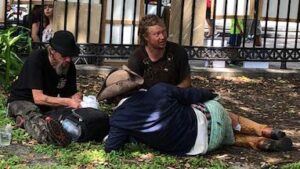 You’re 25 years old (maybe 30, maybe 40?), sailing through life in a fast-paced Gig-Economy, paying the rent and utilities, mostly eating out on the run, doing a fair amount of social media, streaming Netflix, playing video games, and, generally, looking forward to more of the same as you move UP in the world.  Life is good!

Then a pandemic hits.  You’re a Gig-Worker.  You have no safety nets.  No savings.  No health insurance.  No unemployment insurance.   And no viable prospects.  THIS part of life is NOT good!

Jim Rohn used to ask: “Who sold you on that plan?”

But it’s not your fault!

People said you were “Special”.   In primary and secondary education, they kept advancing you to higher grades every year just for showing up.  You put on your Superman underwear and conquered all sorts of imaginary “bad guys”.  You wore your Jedi Knight T-shirt and ruled a totally virtual universe.

And people smiled and nodded and clapped!

And they gave you an official certification of matriculation

My personal certificate of matriculation states the following:

“[LAK] … is now admitted to that degree

with all the rights, privileges and immunities

Moreover, as is invariably underscored during political campaigns, the Declaration of Independence of the United States of America guarantees your free and unimpinged matriculation through life:

“ … all men are created equal … they are endowed by their Creator

among these are life, liberty, and the pursuit of happiness.”

… even, or most especially, some are quick to claim, to the extent of resisting the “over-reach” of government officials who may be inclined to restrict individual freedoms that impinge on the welfare and “unalienable rights” of others.

This is where things start coming unglued.

In a civilization worthy of our full participation, certain expectations apply.  We can’t “cherry pick” our way around all the responsibilities required to afford all the freedoms, privileges and entitlements we’d like to claim.   In fact, the “freedoms” are only as broad as the “responsibilities” are wide.

Interestingly, as much as you have the rights to life, liberty and the pursuit of happiness,

you ALSO have the right to royally screw up your life.

But nobody is beholden to rescue you.

And there is no indemnification clause holding you harmless.

Here are some other things most of us were never told:

“Help!  I’ve been trying to look for another job, as fast food just don’t cut it.”

Between the ages of 18 and 40, one should continuously gain enough skills, education and experience to become competitive for promotions every 3-6 years.  That won’t happen without total intentional effort.

“I figure if you want to win, you have to be a little uncomfortable.”

Here it is in a nutshell:

Inscription on an old Farmhouse Calendar

There is much more to consider that you have not been told.*  But these are helpful starters.

No, it’s not your fault that you didn’t know some or all of the above.  But I think it’s way past time for somebody to take “Nobody ever told me that!” off the table.   Here it is.  Quartermaster

*[A much more detailed rendering is included in the book “Hard Truths” from ERTIA UNLIMITED, currently available only in electronic form by special request.]