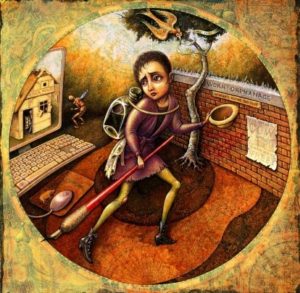 Angela Duckworth etched GRIT into our Life Mastery Lexicon in her book “GRIT: The Power of Passion and Perseverance”

So I’ve been trying to figure out how to “etch” it into my daily routine. I’m RETIRED! But I’m not DEAD … yet!!

At first glance, one might suggest that you’ve either got it or you don’t.

Natural ambition and innate passion are a more or less spontaneous source of what may pass for GRIT. But that’s not really GRIT, is it? If you’re simply following your gut and responding to that inner drive, it may LOOK like GRIT … and SOUND like GRIT … but, if it doesn’t carry the same sense of SACRIFICE or need or commitment for GOING OUT OF ONE’S WAY to advance one’s position, it may not legitimately be called GRIT.

“The time for taking all measures for a ship’s safety
is while still able to do so.”
Admiral Nimitz

Much of what we know about GRIT ON THE GROUND, comes from the military. My personal view of GRIT has been greatly shaped by the 2014 Commencement speech given by Dr. William H. McRaven at the University of Texas. Here’s a summation:

II. You’re not going to do it all by yourself, but you have to do your part. Dip your oar completely in the water to carry your part of the bargain, and pull together with others.

III. Nothing matters more than the size of your heart to fulfill the mission you are on.

IV. Get over being kicked in the teeth, soaked to the gills in frigid ocean water and forced to run a gauntlet with sand in your pants. It’s not the worst thing you’ll ever face, you won’t die*, and everybody who is anybody will welcome you to the club of those who toughed it out.

V. You will fail. Failure is built into the system. It’s there to weed out those who are not totally committed or don’t have the heart. Persist!

VI. Sometimes you have to change the paradigm. Don’t always follow others or the “obvious” path. Take a risk, face the gauntlet headlong and break a few records in the process.

VII. There are lots of sharks in the world. Stand your ground and face them down.

VIII. Learn to be calm. Know who you are and what you can do and be prepared to BE more and go farther than you ever have before. You will need to be at your very best in the darkest moment. Be prepared and be calm. You can do it! Others have.

IX. Start singing when you’re up to your neck in mud, frozen to the core and way past wanting to give up waiting for the sun to rise. Don’t ever ring the bell to quit and get out. Resolution will come!

*NOTE: Although you may not die, physically, the part of you that operates on MISTAKEN ASSUMPTIONS, UNREALISTIC EXPECTATIONS and UNWARRENTED ENTITLEMENTS needs to be laid summarily to rest.

GRIT is largely supported and sustained by carefully honed and totally intentional SELF-TALK. Like:
“Get your butt out of bed – NOW!” /\ “I can DO this!” /\ “Indulgences are for LOSERS.” /\ “Feel the pain; enjoy the GAIN.” /\ “Failure is NOT an option! There is no ELSE.” /\ “Eventual Surmountability is the name of the game.” /\ If I lose, it won’t be for lack of giving every last effort I’ve got … no backing down or out.” /\ SING! /\ DANCE!

GRIT is a full-fisted grasp of the best you can be and do …
in THIS moment AND in the NEXT.

• GRIT is logging your 10,000 hours striving to perfect your art in basements and boiler rooms while building marketable assets (Malcomb Gladwell).
• GRIT is staying on the golf course after each competition to perfect your drives and putts (Tiger Woods).
• GRIT is going back to the gym after every basketball game to perfect your foul shots and 3-pointers (Larry Bird/Jerry Lucas).
• GRIT is not accepting the prognosis of never walking unaided after suffering infantile paralysis … and going on to become one of the most highly acclaimed Olympic champions (Wilma Rudolph).
• GRIT is acknowledging personal limitations, but with a “no excuses” commitment to either overcoming or compensating for – or OVER-COMPENSATING for – those limitations.
• GRIT is an absolute abstention from the attraction of “bright shiny objects”.
• GRIT is going ahead and doing whatever “They Said … Couldn’t be Done” (Edgar A. Guest) https://www.poetryfoundation.org/poems/44314/it-couldnt-be-done
• GRIT is “bucking the system”, NOT to tear it down, but to transform it to BETTER.
• GRIT is being environmentally responsible, even though it costs more in the short term.
• GRIT is doing the “right thing”, NOT because it’s “Politically Correct”, but because it’s RIGHT.
• GRIT is doing the “right thing” when you don’t feel like it … even though it may be “inconvenient” … like maybe NOW!
• GRIT is taking the paradoxical, “insufferably authentic” path ANYWAY. https://www.paradoxicalcommandments.com/

One Response so far.